Kids birthday parties need to be fun and engaging. What better way to get the all to have fun with a variety of kids birthday party games. Not only will it make them all get involved, it will also help keep them entertained for hours to make the party a day to remember. 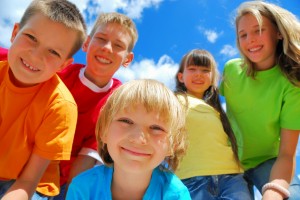 Get them running and chasing each other around with laughter. A game for 4 or more children. Get them all sitting around in a circle with one child who is tagged. The child who is tagged must walk around the circle and tap each child’s head saying either duck or goose. Once a child is the goose, they must get up and try chase the tagged child outside of the circle. The aim is for the tagged child to sit in the gooses spot before being tapped by the goose.

A classic game testing their balance which will have them all giggling away. You’ll need a few boiled eggs and a few teaspoons. Set out a path which the children must take which will eventually lead towards a finish line.

With each child receiving an egg and spoon, tell them to place the egg on top of the spoon and put one hand behind their back. When you tell them to go, they are to race around the path whilst balancing their egg until they reach the finish line. If the egg drops, they must start again.

Whoever balances their egg all the way to the finish line wins.

The aim of this game is for the mouse to get out of the circle and avoid being caught by the cat. The mouse must be constantly moving though cannot stay in the circle for more than 10 seconds. The cat is not allowed to come inside the circle though can reach inside and try grab the mouse.

The children in the circle have to avoid for the cat to get the mouse by allowing the mouse in and out of the circle by holding up their hands. They are also allowed to block the cats attempt in grabbing the mouse by standing in its way. If the mouse is caught then it turns into a new cat. The old cat joins the circle and a new mouse is taken from the group.

A fun game to get them dancing away, that is until the music stops. With five or more children, have some music playing and allow for them to move around and dance with the music. When the music stops, they must all freeze without giggling or flinching. The first child to move is out of the game. If the children do a great job in holding their composure then restart the music. Eventually you will get it down to only one winner.

A fun way to have kids excited about the mystery of what’s within the parcel, having to be one of the best kids birthday party games of all time! You will need a small gift and a few tasty treats along with some old news paper and sticky tape. Firstly wrap the present with the newspaper and with a new layer add a small treat and wrap tightly. Add as many layers as you like for however many children there are. Make sure you do this well before the birthday begins.

Kids birthday party games 6 – Pin the tail on the donkey

An old favorite which will have them dizzy with excitement. Grab yourself a picture of a donkey missing a tail, some donkey tails and blobs of blu tack.

A great fun game for 3 or more children to test their listening skills. Firstly, establish an imaginary line on the floor with the players lining up behind it. Choose one of the children to be the ‘Simon’. Simon is to stand a good distance behind (Around 3 meters).

Simon is to make commands for the players to abide by (Example – hope twice on one foot, put your right hand on your head, take two steps forward, etc).

A family favorite which is bound the get them excited either indoors or out. Get yourself some small lollies which the kids will love and individual baskets for the children to hold. Gather the children and place them in another room or place where they are unable to see what is going on. Hide all the goodies with the difficulty depending on the age of the children. Then give each child a basket and allow for the treasure hunt to begin. The hunt isn’t over until the last lollie is found.

A simple yet fun game, with just a few rolls of toilet paper! Get the kids in groups and make them select their mummy. Allowing 3 toilet rolls per mummy, get them to work in teams in a race to see who can wrap their mummy up first.